You’ve all heard somebody say they’ve been stung by a bee. But why does the poor honeybee always have to take the blame for the stings? Yes, a honeybee can and will sting, but bees rarely sting when looking for food or water. Since bees have barbed stingers, the act of stinging tears away part of her abdomen and she will die. Not really the highlight of her day, eh? So it stands to reason that honeybees are not out seeking a human to sting.

Of course, honeybees are protective of their hives, because they don’t really want to share their honey. Guard bees stand at the opening of the hive, ready to discourage intruders of any kind. Even then, they give warning signs like buzzing near your head, before they actually sting. And of course, if you step on a bee or swat at her, she will sting you in self defense. Our silly Maltese dog manages to step on them on a regular basis, and he is a pitiful patient. He walks with a limp for several days afterward because it earns him extra goodies from the treat jar. Compared to other insects, like wasps and yellow jackets, the honeybee pretty much wants to mind her own business and do her job. 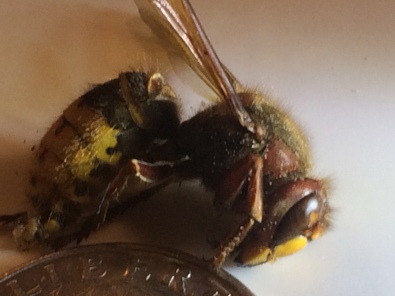 Lately, here at Bee Sweet Bee Farm, we’ve been having trouble with European hornets. Now there’s a vicious insect for you. The first ones we saw were in our house, which is a little unnerving. This hornet is pretty big, and if she can find a way to creep in our house, no telling what else can get in. These hornets caused a huge uproar with the little beekeepers that live here.

My middle child suffered a hornet sting on the top of her head last summer, and she has yet to forgive that creature. (We shouldn’t be surprised since she still bears a grudge from a cat bite when she was three, that left her declaring that all cats are evil.) Anyway, to put it mildly, she was alarmed. Next we began seeing these hornets out at the beehives. A European hornet is large enough to grab a honeybee out of the air and haul it off for a tasty snack. Biology student me says this is an amazing demonstration of the food chain in action (Primary Producer Flowers<Primary Consumer Bee<Secondary Consumer Hornet<Tertiary Consumer Bird), but these bees are our pets. We couldn’t just watch them get abducted in our own yard. I mean, if a predator were trying to nab your little Fluffy, you’d do what you could to save her, right? So my problem solver husband took action and swatted her, saving many innocent honeybee lives.

Now before y’all get all crazy because we killed this hornet, please know he brought it in for thorough scientific identification and investigation. (Smart on his part, since hornets give off pheromones when they are injured, alerting all of their friends that the crime has been committed. If he had hung around, it might of turned ugly.) Anyway, she did not die in vain. If you notice there’s a quarter in the picture for size reference. The hornet’s body was curling up at this point, so her size is not as awe inspiring as it would be if she were stretched out. Worker European hornets are about 25mm long. Compared with the 15mm worker honeybee, she’s pretty big.  Along with munching on smaller insects, these hornets also gather some nectar from plants, and you can see a bit of pollen on the hornet’s hairs in the photos.

The hornet is larger and has a more defined waistline than a honeybee. Lucky hornet gals don’t have to work very hard to maintain their girlish figures. Their color 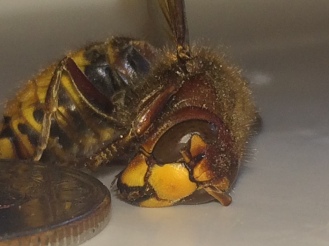 markings are also brighter yellow and black while bees are more often a brownish yellow. Their stingers are not barbed, like our friend the honeybee, meaning they can sting you multiple times without dying. There will be no stinger left behind to remove, instead just wash the area and apply ice. (And for heaven’s sake, go somewhere else for medical advice! What was the commercial…I’m not a doctor, but I play one on TV? I am in no way a medical professional, and I only don that hat when parenthood necessitates splinter removal or temperature taking.)

I know, you might not be nearly as fascinated by that dead hornet as we were, but welcome to the crazy world that is Bee Sweet Bee Farm. Just let it bee a little reminder that not all stings are bee stings. Have a great day and Bee Sweet!