A couple of weeks ago, we had a fun time introducing our kids to the sport of wrasslin’ through a few comical You Tube videos. (Not to be confused with wrestling, which is a real sport with rules and such.) Having lived all my life in the South, I’m not sure if this is a southern thing or just what, but when I was younger, wrasslin’ had quite a following. The boys at my elementary school could recount every move that their favorite star had made on tv the night before. They probably tried out their own moves on the playground, but I was far too busy talking high fashion, like Swatch watches and twister beads, with my friends to notice. My husband’s grandfather was such an avid viewer that he wouldn’t allow anyone to talk in his house when wrasslin’ was on the air. Me personally, I’ve just never been a fan. Somehow watching sweaty, grown men in costumes beat up on one another never held much fascination for me.

Really fighting of any sort didn’t draw me in, until there were bees involved. That’s when I became a spectator!

The Bee Sweet girls are normally so calm that they can be worked with little or no protective equipment. My husband and kids usually wear their jackets and veils, in case a bee gets upset, but I just stand in the middle of these girls in my regular clothes to watch and take photos, and I have yet to be stung. (The bees are probably watching me type through the window, and I’m sure tomorrow will bee the day they teach me a lesson.) Now I’m not advocating that you go hang out at any old beehive, up close and personal, cause our girls are probably just weird…everybody else in our family is, it stands to reason that our bees are too.

Sunday was a different story altogether!

Background info: My husband is trying to entice a small nucleus colony (basically a small hive of bees that we’ve babied all summer) to build more honeycomb in their hive. Bees have a small wax gland (who am I kidding, everything on a bee is little) that they use to make 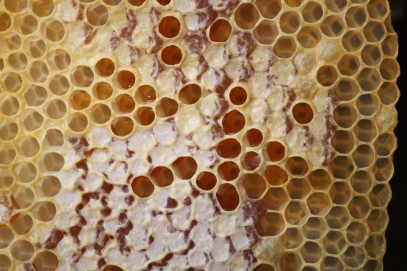 beeswax, one tiny flake at a time. Ten to eighteen day old bees have the job of making wax for the hive. (Talk about child labor! And my kids think loading the dishwasher is torture.) After they get older, they move on to other jobs. It takes a lot of energy to make beeswax, so to help speed production we’ve been feeding these girls a supplement of sugar syrup. In turn, they make extra honeycomb to store more nectar during the fall nectar flow. They could do some of this on their own, but feeding sugar syrup helps them build comb easier and faster. Much like me after I’ve had my second cup of coffee every morning…I can just make more things happen when I’ve had a little extra caffeine. The photo shows honeycomb cells, some empty, some filled with nectar, and some already full of capped honey. Honeycomb in other parts of the hive is used for eggs, larvae and baby bees.

Not only do bees have to worry about bears, skunks, raccoons, ants and pesky beekeepers coming along to take their precious honey stores, but also neighboring hives of bees. Honeybees have a keen sense of smell, so they know what’s happening in the ‘hood, just like we know when the neighbors are throwing steaks on the grill. If a hive is not strong enough to protect itself, the neighbors will come over, steal their honey or nectar, and transport it home for their own use. Each hive has guard bees that stand in the entrance and watch carefully for intruders of all sorts. 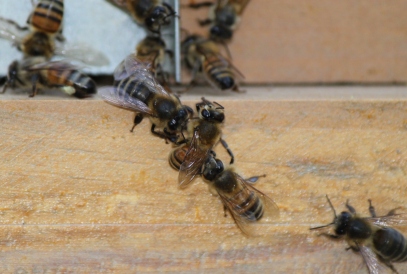 Bee Wrasslin’: Evidently, the neighbor bees caught wind that the small colony had been fed a tasty ration of sugar syrup and they sent bees over to collect their share. The guard bees alerted the workers, and these girls came out fast and furious to protect their precious honey, making professional wrasslers look calm in comparison. Whoever coined the phrase “like a hive of angry bees” wasn’t kidding! I had the experience of watching these girls in action. From a distance, there were tons of bees flying erratically all around the hive. By looking closer, I could see the outside of the hive was dotted with bees locked in battle.

The first thing a bee tries to do to protect the hive is to bite the foreigner. A bee can bite many times, but as we learned last week, she can sting only once, so biting is much preferred! Several of the skirmishes showed multiple bees ganging up on one intruder. Eventually, if necessary, each bee is willing to

sting an intruder and die to protect the hive. I watched, fascinated at how our sweet girls turned into fighting machines. The ground in front of the hive was littered with little bees that didn’t survive the skirmish. Hard to say which side the dead bees were from. (It was our loss either way, since those bully bees are ours too.) Would good prevail over evil? Could the larger hive be stopped? No need to worry! These little ladies had things back under control in just a little bit, and hopefully their neighbors will think twice about venturing next door to steal again. I was amazed at the vicious, head to head combat that our sweet babees were capable of. They could put a professional wrassler to shame! Maybe I’ll think twice before I head out uncovered again!

Until next time, Bee Sweet, and don’t mess with a beehive or they might unleash a Smackdown on you!